For some people human rights issues have become a commodity 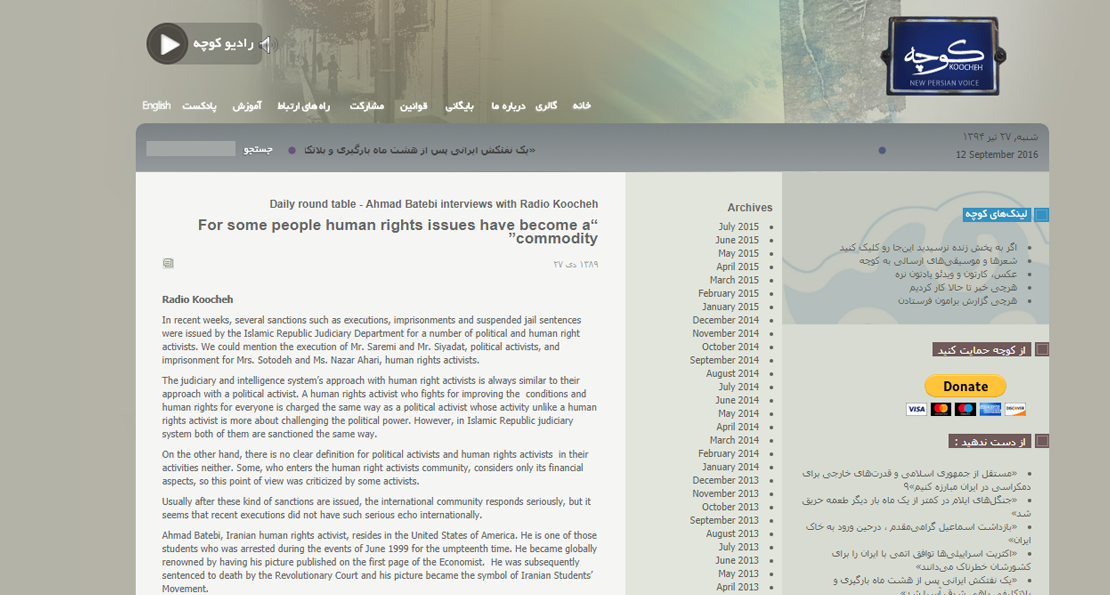 In recent weeks, several sanctions such as executions, imprisonments and suspended jail sentences were issued by the Islamic Republic Judiciary Department for a number of political and human right activists. We could mention the execution of Mr. Saremi and Mr. Siyadat, political activists, and imprisonment for Mrs. Sotodeh and Ms. Nazar Ahari, human rights activists.

On the other hand, there is no clear definition for political activists and human rights activists in their activities neither. Some, who enters the human right activists community, considers only its financial aspects, so this point of view was criticized by some activists.

Usually after these kind of sanctions are issued, the international community responds seriously, but it seems that recent executions did not have such serious echo internationally.

Ahmad Batebi, Iranian human rights activist, resides in the United States of America. He is one of those students who was arrested during the events of June 1999 for the umpteenth time. He became globally renowned by having his picture published on the first page of the Economist. He was subsequently sentenced to death by the Revolutionary Court and his picture became the symbol of Iranian Students’ Movement.

Mr. Batebi! Considering the recents executions in Iran and regarding the attention brought to them by the international community, all of the sudden some more sentences have been issued for social and human rights activists like Shiva Nazar Ahari and some others. Please tell us what you think about why and how these sanctions have been issued and what the goals of The Islamic Republic are regarding these sanctions.

Such events usually do have international reaction and feedback. But it seems that for recent executions the international community did not have a very serious reaction. Are the groups outside the country like yours are trying to reflect the executions internationally?

The ones who are acting in the fields of human rights and look at it it as source of income are the organizations that are trying to get supports from governments. When a human rights organization receive any financial support, they have to present plans and are be responsible for the money. They are responsible of where and how they spend it and must report whether it was effective or not. This creates a competitive process in human rights affairs and those who enter this field are trying to eliminate those who have earned resources and act professionally, and want to become pioneer in the field of human rights.

The atmosphere of Iran human rights framework is not in a law-frame so it is not based on ethics. It is a frail human rights community which is vulnerable and the scope of human rights violations is so widespread that if some more organizations were to be added, still a big gap remains in human rights activities.

The atmosphere of Iran human rights framework is not in a law-frame so it is not based on ethics. It is a frail human rights community which is vulnerable and the scope of human rights violations is so widespread that if some more organizations were to be added, still a big gap remains in human rights activities

Regarding the human rights affair as money making job causes the elimination of other groups and put more pressure on those who act individually and marginalize them. This causes conflicts between human rights activists and create a gap in human rights activists community and also causes a selective view for defending violated ones. That means: is defending this victim compatible with the organization financial point of view or not? The second thing is that if this victim is supported, would it be profitable considering the propaganda or can fulfill the desires of supporting organization or could be used for showing off or not.

This creates a polluted atmosphere. I saw many who were effective in human rights affairs and were respectful persons who entered such organizations, they totally changed their views and became money making oriented. This is the biggest problem that we encountered for international echo in the region regarding the victims of human rights violations.

Recently, Shiva Nazar Ahari was sentenced to a long imprisonment. Kohyar Godarzi, Hossein Ronaghi Maleki, Mahdi Khodaei (The secretary of Islamic committee of Azad University), Dr. Ahmad Fakhradin (lawyer), Dorsa Sobhani, Behzad Mehrani, Rasool Naghipoor (journalist), Abedini, Mahboobeh Karami and Khalili and many others who were active for so many years are not able to do anything due to convictions. Thisis a big loss in human rights watchers in Iran, those whose reports were healthy, true and documentable. This weakness causes human rights activists community to face problems in supporting human rights activists and supporting all the victims of human rights violations.

If we assume that those who were trustworthy reporters are facing such hard times that they do not have the opportunity to continue any more and considering that money oriented activists you mentioned still present, do you think that human rights reports reliability would ultimately decline and lead to reduced global trust toward domestic reports from Iran?

Maybe it does not happen. Because the Medias are strong enough and there are so many citizen journalists that find news and documents about human rights violations that we do not see any problem for having reports but the analysis of human rights issues are very important. The person who is well-known and meet the standards of human rights is the right person to refer to. That means that if we or human rights organizations receive odd or incomplete reports, it can only become publishable with confirmation of those persons. If they are not around, problems would emerge. I strongly believe we will not face any problem in getting reports but we might face obstacles in working with those reports, referring to them, form a file or focus on the issue