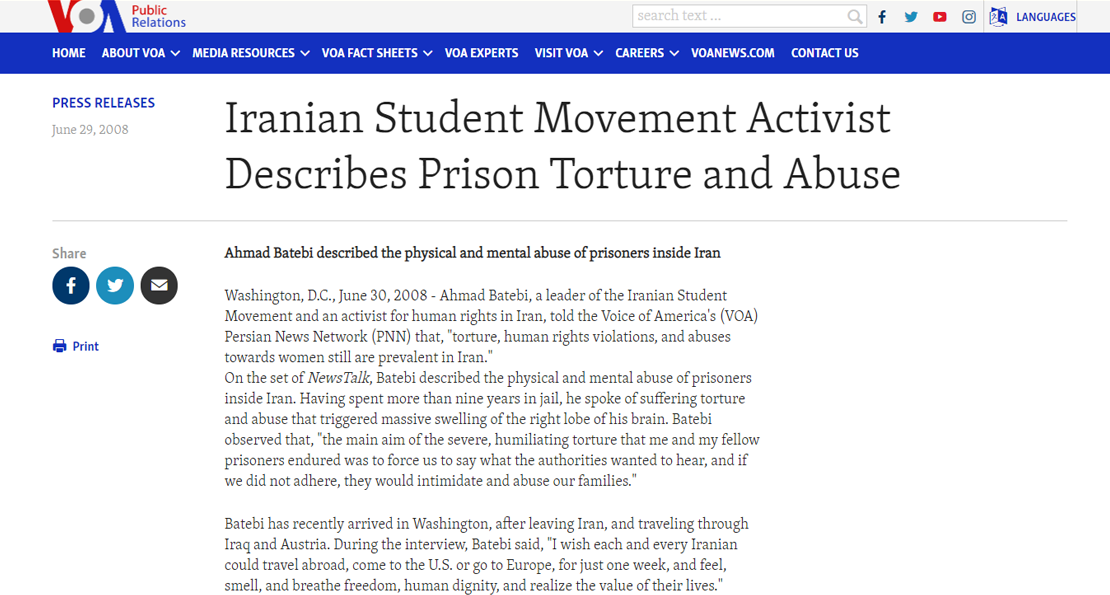 PRESS RELEASE - Washington, D.C., June 30, 2008 - Ahmad Batebi, a leader of the Iranian Student Movement and an activist for human rights in Iran, told the Voice of America's (VOA) Persian News Network (PNN) that, "torture, human rights violations, and abuses towards women still are prevalent in Iran."

On the set of NewsTalk, Batebi described the physical and mental abuse of prisoners inside Iran. Having spent more than nine years in jail, he spoke of suffering torture and abuse that triggered massive swelling of the right lobe of his brain. Batebi observed that, "the main aim of the severe, humiliating torture that me and my fellow prisoners endured was to force us to say what the authorities wanted to hear, and if we did not adhere, they would intimidate and abuse our families."

Batebi has recently arrived in Washington, after leaving Iran, and traveling through Iraq and Austria. During the interview, Batebi said, "I wish each and every Iranian could travel abroad, come to the U.S. or go to Europe, for just one week, and feel, smell, and breathe freedom, human dignity, and realize the value of their lives."

Ahmad Batebi, gained notoriety in July 1999 for holding up a bloodied shirt belonging to Ezzat Ebrahim-Najad, a fellow student, who had been beaten by the 'Basij' paramilitaries. Following publication of the photo, called "an icon for Iran's student reform movement," Batebi was arrested, tried in closed-door proceedings, found guilty and sentenced to death by Tehran's Revolutionary Court. His sentence was later reduced to 15 years after domestic and international outcry.

NewsTalk is a daily, 60-minute Persian TV call-in show (11:30 P.M.-12:30 a.m. in Iran) featuring interviews with newsmakers and personalities in the news. VOA has the largest audience of all international broadcasters in Iran, with one in four adult Iranians tuning into a VOA show each week. Programs are also streamed on www.VOAPNN.com.

The Voice of America, which first went on the air in 1942, is a multimedia international broadcasting service funded by the U.S. government through the Broadcasting Board of Governors. VOA broadcasts more than 1,250 hours of news, information, educational, and cultural programming every week to an estimated worldwide audience of more than 115 million people. Programs are produced in 45 languages.

For more information, please call the Office of Public Affairs at (202) 203-4959, or e-mail This email address is being protected from spambots. You need JavaScript enabled to view it.