Explanation about audio file of my-conversation with my interrogator

Recently, Abbas Fakhravar, one of the exposed agents of Iran’s Intelligence Ministry, published on his YouTube account an incomplete, manipulated audio file with incorrect English translation, under the title of “Ahmad Batebi’s secret conversation with the Deputy Intelligence Minister,” claiming that I have connections with the Islamic Republic of Iran.
In order to elucidate the matter for public opinion, here I will explain the true story behind that audio file, when and how it was recorded. I herein present all the relevant documents, as well as the full, uncensored audio file.

How the audio file was recorded and published
First of all, let me state that the audio file is genuine and the voice in it belongs to me.
The audio file is one of the documents that I presented to Iranian and United States media in 2008 as an example of the pressure exerted on political activists by the Iranian intelligence apparatus.
In 2008, after I fled Iran and took refuge with the Democratic Party of Iranian Kurdistan (DPK) in Iraq’s soil, my special interrogator at Iran’s Intelligence Ministry found my telephone number, in a way which is unknown to me, and contacted me. The said interrogator was constantly monitoring me during my years in prison, and particularly over the few months before I left Iran, during which I was on medical leave from prison. I was required to inform him by phone of my whereabouts and my trips within Iran. When he called me in Iraq’s Kurdistan, he asked me to return to Iran, claiming that the Judiciary and the Intelligence Ministry wanted to help me. 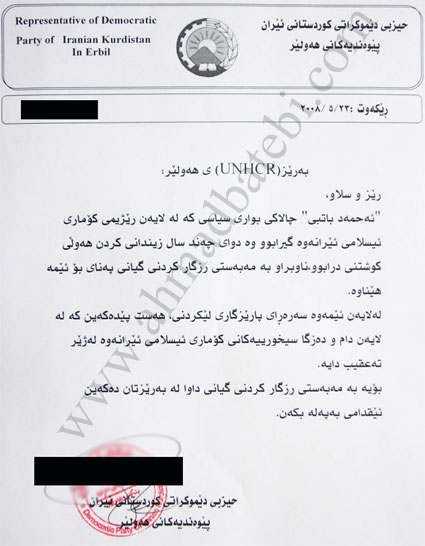 He even suggested that even if I did not intend to return to Iran, he could make arrangements for me to receive an Iranian passport through the Intelligence Ministry’s agents in Iraq, s that I could leave Iraq without facing any problem.
I immediately informed the DPK of the phone conversation. The officials of the DPK thought that the interrogator was trying to flush me out of hiding through promises such as providing me with a valid passport. The DPK asked me to record any further phone conversations if the interrogator contacted me again, and try to discover the real purpose of the interrogator and the Intelligence Ministry without provoking a reaction on their part.
According to the DPK’s instructions, when the interrogator called me again, I steered the conversation in a way that the interrogator would repeat all his suggestions. Subsequently, I submitted the recorded file to the DPK.
Following the two phone conversation, at the discretion of the DPK my phone number was changed so that the interrogator could not contact me again. The DPK officials had earlier warned the officials of the UNHCR in Iraq about threats against my life, both verbally and in writing. After examining the recorded file, the DPK officials wrote another letter to the person in charge of the UNHCR in Irbil, Iraq, asking the UNHCR to have me leave Iraq as soon as possible in view of threats against my life.

Censored parts of the audio file

Full version of the audio file

Since the first days of my arrival in the United States, I mentioned the conversation with the interrogator in my official interviews and speeches. It was also mentioned in Iranian and United States media.
In the intro to an interview with me on 13 July 2008, the New York Times wrote:

But in Iraq, his former captors had one more chilling message for him. Not long after his arrival in Erbil in March, the new cell phone provided by United Nations officials rang. Mr. Batebi was shocked to hear the familiar voice of the chief interrogator at one of Iran’s notorious prisons.
“We know where you are,” the interrogator said. “You must turn yourself in.”

Click here to read my interview with the New York Times. (Link) 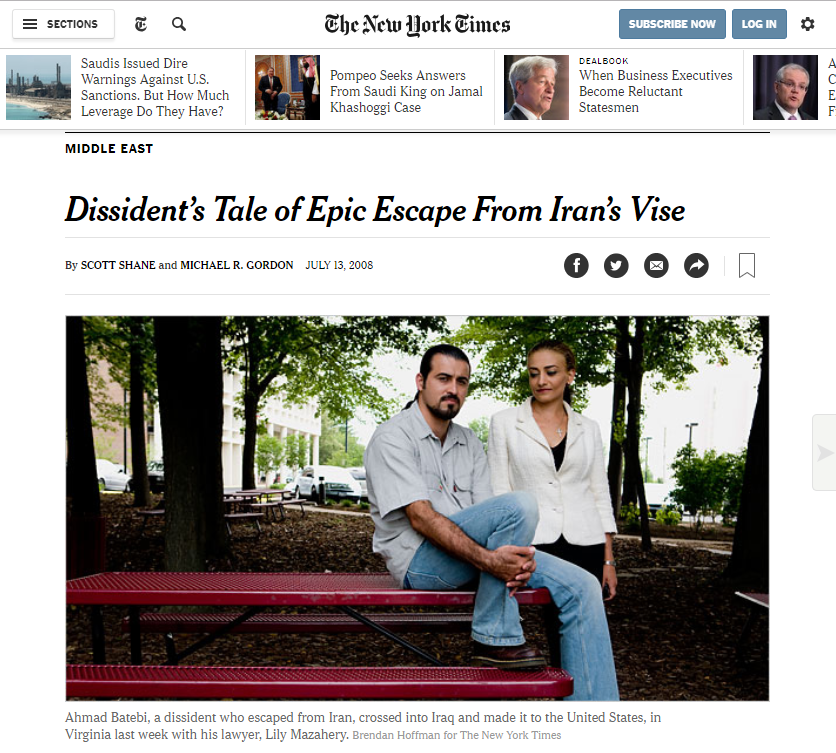 On 7 July 2008, in my first interview with the website Rooz Online, titled “Story of that Great Escape,” I explicitly talked about my conversation with the interrogator and recording it during my stay in Iraq. I said:
“We had tried to make the [Intelligence Ministry] believe that I was in Turkey. However, the Intelligence Ministry managed to find my personal phone number, with only the UN had, and called me in Iraq. They said ‘You should go back to Iran. Go introduce yourself to the Iranian consul. Then we will issue you a passport, and we will help you financially so that you can go wherever you want. I recorded their voice.” 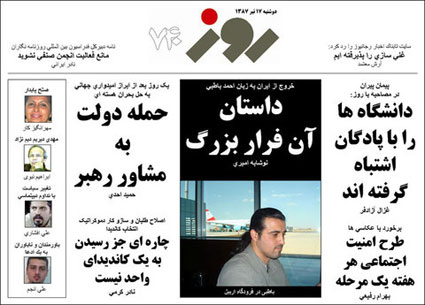 Rooz Online: How did you feel when you heard his voice?

“I was surprised, because no-one had my number. I did know that they had advanced surveillance equipment and they could identify my location. However, when they called, the DPK wrote a letter to the UN, saying ‘We have information showing the Ahmad Batebi’s life is in danger and he should be sent out f Iraq as soon as possible…” (Link)

On 26 July 2008, in an interview with Radio Zamaneh, again I spoke about the audio file, saying:

“…At that time I was under the protection of the DPK, and their investigations led to the identification of the team [of Iran’s Intelligence Ministry which was after me]. The DPK sent a full report about the situation and the Iranian security forces stalking me to the UN office in Irbil, based on which it asked the Un to have me sent out of Iraq as soon as possible.
“The Intelligence Ministry even found my private phone number. I even recorded my interrogator’s voice. It doesn’t make sense that Iran’s Intelligence Ministry would be after someone they have released.
“I will shortly publish a full report about my leaving Iran, with documents and films. I also have an audio file in which my interrogator tries to take me back to Iran. In this file, he asks me to go to the Iranian consulate in Irbil, promising to ignore overlook my escape from Iran, to issue me a passport so that I could go wherever I wanted from Iran…” (Link)

Obviously, the audio file contains neither a confidential conversation nor a secret interview. I had even promised the media to publish it.
Why, four years after I myself published the audio file, did Abbas Fakhravar, one of the exposed agents of Iran’s Intelligence Ministry, published on his YouTube account an incomplete, manipulated audio file with incorrect English translation?

To answer this question, one should note that Fakhravar’s efforts to smear political, human rights and student activists was not confined to me. (Document)
Shortly after leaving Iran in coordination with Iran’s Intelligence Ministry, he began a smear campaign against those who knew about his dark past.

Abbas Fakhravar was jailed in Iran for rape (document) and then, cooperating with the Intelligence Ministry, he was transferred to the ward of political prisoners (document). His prison record includes beating up sick political prisoners (document), spying for the security department of the prison (document), and having sex with rapist convicts.
Immediately after being exposed by political prisoners, he immediately left the prison under the guise of a “leave” in coordination with the Intelligence Ministry. Then, claiming that he still had to serve more years in prison, he received a government-issued Islamic Republic passport and left Iran. His passport contained his genuine data, and he left Iran through Tehran’s Imam Khomeini Airport without facing any problem. Then with the assistance of American citizens such as Richard Pearl, who had no knowledge of his true background, he was admitted into the United States. (document)

Soon after his arrival in the United States, he began smear campaigns against figures of the Iranian opposition and sabotaging projects of the opposition. The result of such actions was that he was soon identified as a small-time agent of the Intelligence Ministry by the Iranian diaspora, and became known as an infamous figure. (document)

After being expelled by the Iranian community, he took advantage of the lack of knowledge of American individuals, trying to approach the American community, posing as an opposition political activist by fabricating false background for himself. Recently, Maryland-based American journalist Kenneth Timmerman published shocking evidence of Fakhravar’s connections with Iran’s security apparatus on the website www.iran.org.