Everyone Makes Mistakes, Including Us: An interview with Ahmad Batebi | PART 2 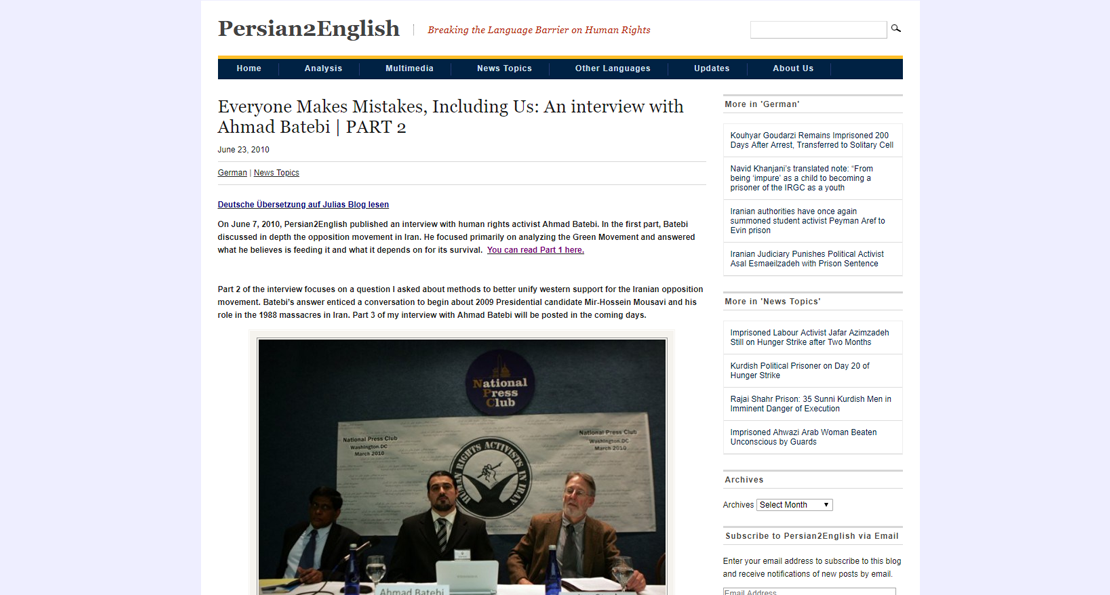 On June 7, 2010, Persian2English published an interview with human rights activist Ahmad Batebi. In the first part, Batebi discussed in depth the opposition movement in Iran. He focused primarily on analyzing the Green Movement and answered what he believes is feeding it and what it depends on for its survival. You can read Part 1 here.

Part 2 of the interview focuses on a question I asked about methods to better unify western support for the Iranian opposition movement. Batebi’s answer enticed a conversation to begin about 2009 Presidential candidate Mir-Hossein Mousavi and his role in the 1988 massacres in Iran. Part 3 of my interview with Ahmad Batebi will be posted in the coming days.

PART 2 | Everyone Makes Mistakes, Including Us

Maryam NY: I think you agree that supporters outside Iran need to unite more for the Iranian people’s movement. How can we be more united?

Ahmad Batebi: We Iranians think we are good and everyone else is bad. For example, when you tell someone to come and take part in a demonstration, he or she says, “No, I’m not coming because there will be monarchists there.” Then you ask, “What’s wrong with that?” They respond, “Monarchists stole and robbed the country’s money and left Iran.” Then you say, “Let’s go to another protest.” They say, “No, because there will be MKO (Mujahedin Khalq Organization) people there.” You ask, “Why is that bad?” They answer, “They went to Iraq in the midst of the Iran-Iraq war and betrayed the Iranian people.” Then you ask the monarchists, members of the MKO, and the leftists to come to a [planned] demonstration. They say they are not coming because Mousavi supporters will be there. You ask, “What is the problem with that?” They respond, “Mousavi was the Prime Minister at the time of the 1988 massacres.”* This shows that our mind passes judgment rapidly: “this is good” and “that is bad.” We think that we are right and good and others are wrong and evil. The judge who sits in our minds is not a fair judge, but rather like a Saeed Mortazavi** who does not allow defense for the other side. People make mistakes. Everyone errs. Do you want to ban a person from entering the movement forever? The first step is to say that we are bad and others are good. Then we need to kill Judge Mortazavi from our heads and admit that we also make mistakes like others.

Maryam: In your view, should Mousavi explain his role in the 1988 massacres?

Batebi: No, not now. Look, I am not a “Mousavist”. I believe that people should vote [in the Presidential elections], because I believe in active participation. I say that if everybody casts a vote, then every single person can make demands. The reason that the movement has become so strong is that many people participated [in the election]. Then they asked, “Where is my vote?” If we had boycotted the election, we wouldn’t have this many “creditors” asking for their shares. But, I didn’t vote for Mousavi and I disliked him because I believed he was a little conservative and he still wants to take Iran back to its origins [of the 1980's]. However, as time passed, I realized that I was very wrong about Mousavi. It is true, my mode of thought is different from Mousavi’s. I am a secular person and I do not have many common views with him in such domains, but now, I have a lot of respect for him, because he has stood up to defend the people’s rights. If we want to kill Mortazavi from our minds and judge [Mousavi] realistically, then in the era that Mousavi was Prime Minister, let’s consider that there were three separate powers [estates] in Iran: legislative, executive, and judiciary. Those who committed the murders were in the Judiciary. If we put ourselves in Mousavi’s shoes, in 1988, in the midst of war and conflict and while Khomeini was still alive and had such charisma, what should we have done? Were we supposed to kill Khomeini? Were we supposed to stand up to the Judiciary? The mood and atmosphere was not such that Mousavi could do anything in particular. However, Mousavi should explain one day what the issues were, who was responsible, and what his role was. If he had made a mistake, he should apologize to the people, and if not, he should offer an explanation. He has to do this, but doing it now means hitting and beating ourselves. Once the movement prevails, then there is a lot of time to ask Mousavi to address this issue.

Maryam: The reason I suggested Mousavi to acknowledge the massacres is to unite the people more.

Batebi: But such an acknowledgment is only important for unifying people outside Iran. It’s not important for people who live inside Iran. It is enough for the Iranian people that Mousavi has had the courage to stand up to the ruling establishment. We who live outside the country cannot decide for the Iranian people. [What you mentioned] is the demand of the Diaspora community. I also believe he has to explain [his role], but we have more important issues to deal with right now. The people in Iran want the movement to continue breathing. It is better if Mousavi shows courage and stands like Karroubi. Then, later, we have time for all these debates.

Translator’s notes | * In the summer of 1988, and as the war with Iraq ended, Khomeini issued an order that all political prisoners who refused to repent must be executed. As a result, thousands of political prisoners, some of whom have already served their sentences but were kept in prison illegally, were brutalized and mass executed after short interrogation and inquisitive sessions. They were buried in unmarked graves in an area known as Khavaran in the east of Tehran. There is no data available on the exact number or on those who were executed in provinces outside Tehran.

**Saeed Mortazavi is the former Judge of the Media Court, the former Attorney General (AG) of Tehran, and the former Lieutenant AG of Iran. He is responsible for shutting down critcs and dissident newspaper publications and imprisoning journalists. He is named the main suspect in two high profile cases: the death of Canadian-Iranian journalist Zahra Kazemi and the Kahrizak detention centre case where protesters were beaten, tortured, starved, humiliated, raped, and murdered. He is known for his abusive language and his unjust, intimidating, and harsh methods. He has never been charged. Last December, Ahmadinejad appointed Mortazavi as the head of the office for the campaign against smuggling goods and foreign currency. Part 3 coming up